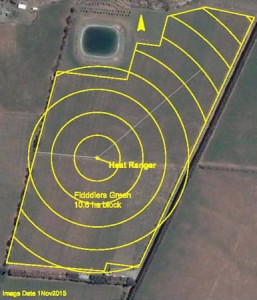 We operated the Heat Ranger at a vineyard in Waipara during October and November 2015 with great results. The block shown below is quite irregular with Heat Ranger located within the existing headland. The circles on the satellite map shown are at 40m centres. The total crop area is 10ha comprising Sauvignon Blanc, Pinot Noir, Chardonnay and Gewurztraminer.

We were measuring temperatures out to 240m but had not extended the equipment out to the 360m extremity of the block.

The key events occurred on the 9th October (4hours) and the 5th November (7 hours) when temperatures at 1m above the ground got down to between -2 and -3°C. and we believe that this is quite an achievement.

Heat Ranger protected the whole crop as the photographs of the vines below show which were taken on the 24th November show. In economic terms it has been very significant. Based on likely prices and yields the numbers look like this:

Without the presence of Heat Ranger on the site this would have been another year without a crop and the long term future of the vines would have been put at risk. In the same district wind machines and helicopters were all working with varying degrees of success. Clearly the potential income has to pay the rest of the costs associated with husbanding the crop from here until post harvest, but there is no doubting the value of the protection effort. A level of protection in this case that extended to the far corner of the vineyard.

These photos were taken two and a half weeks after the 5th November where control temperatures outside the area were at -3°C at crop height.