The Heat Ranger machine was relocated to Lake View Cherries in Otago where the latest planting technique and hail protection is being used in this new, state of the art, orchard where the oldest trees have been in planted in 2013 on the eastern side and the western side the trees have been planted 2014 and 2015. The block is 7.27ha and has 2 wind machines for frost protection. The trees on the eastern end have rain/hail covers that are rolled up above the crop on the 2.5m interval overhead wires 4.2m above the ground. These are unfurled after the frost season to provide rain and hail protection to the growing fruit crop. The van Gool family were happy to evaluate Heat Ranger on their enterprise prior to bud break.

Because of the height of the rolled covers and the tree crop it was decided to place Heat Ranger on a 2m high platform so that we could get the warm air over the top of the crop. The training system for the cherries is to have two primary leaders taken north and south from the trunk at about 50cm above the ground and the fruiting branches then come off these leaders and the bulk of the fruit is carried from about 70cm to 2.5m above the ground. The branches are kept below 4m. This means that there hedge rows of branches that we have to push the warm air down into the bud area and we expected that the rolled rows of hail protection plastic could significantly affect the air pattern from the Heat Ranger machine.

There are a number of masts with temperature sensors at 0.6m, 2.5m and 5m above the ground to measure temperatures within the expected radius of the machine. These were limited to a distance of 200m because that was the maximum distance we had available from the HR Location. A 200m radius equates 13 hectares, 225m is 16ha and 250m is 20ha.

The cold night temperatures at 60cm above ground, within the block can differ by as much as 2 degrees. As far as protection is concerned the whole of the bud zone from 0.7 – 2.5m needs to be protected. The parameters to look for are to maintain the temperature on the crop zone close to zero, and to measure the crop lost or saved, and be able to perform well in spring frosts down to -3oC.

It was also possible to see how effective the wind machines were in this situation and compare with the new Heat Ranger technology.

It became very clear that the two approaches to frost control are significantly different. The wind machines rely on mixing the air from ground level to some height estimated to be about 8 – 10m above ground and if there is a reasonable temperature gradient over this height it will produce an average temperature through the air mass for the range of the wind machine fan. In this case that distance is about 100m radius (3 hectares) from the wind machine.

Heat Ranger operates differently by providing preheated air at a lower volume and in a much more gentle breeze that is pushed out in an overall blanket across the top of the crop and there is less mixing but it extends over a greater distance. With grape vines the bud band and branch height is much less and so coverage is a lot easier than in a hedgerow tree crop which appears to be about 200m (13 hectares) compared with 250m in grapes (20 hectares).

How was the performance?

The left picture shows the rolled up rows of hail covers above the crop with the autumn leaves yet to fall. On the right the leaves have fallen and Heat Ranger is mounted on a 2m high frame to get above the crop.

The machine was tested in part circle mode but the backwards and forwards motion appears to break up the continuity of the air blanket and the results were not as good, even though the target area was being given more than twice the amount of heat from the machine. Our earliest field testing has shown that we get our best results from a three minute rotation. 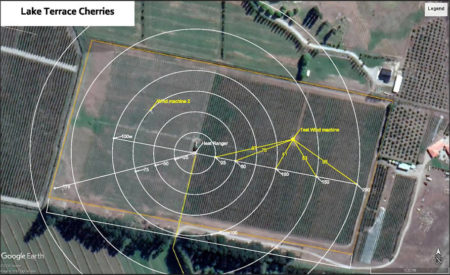 The orchard and test layout. 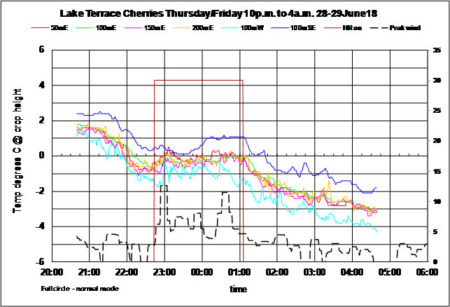 This result is with the HR level on the stand and the East masts are all located within the rolled hail covers.

The Machine is normally set to start at 1 degree and the sensor is normally at 1 m above ground level. With the machine on the 2m high stand the sensor was at 3m, so we should have adjusted for this to equivalecrop height temps at 1 degree. In this instance we were having to play catch up which was achieved.

The HR turned on, (just over 2 hours shown by the brown rectangle on the chart)there is a lift of approximately 1 degree within 10 minutes on all stations except the 100mSE base station which is outside the orchard on the other side of a nylon cloth screen. When the Heat Ranger was turned off, the temperatures dropped by a degree within 15 minutes. In all cases the 60cm temperatures lift more than the 2.5m temperatures and the 5m temperatures show the smallest change (See the next chart).

The 2.5m heat levels do not fall as low as the 60cm temperatures so there is some very worthwhile protection in the bud zone.   It was clear that once the Heat Ranger machine was turned on it halted the temperature decline in the orchard. The reason for turning the machine off was to observe the decline when the additional input of heated air was halted. This was a -3o C to -4o C frost so keeping the crop zone above zero was  significant. At this time the trees were dormant and they can handle cold temperatures.

In all cases the temps on the individual masts came closer together, the longer the machine was running. When we shifted the masts later in the season to the SW side where there were no rolled hail covers this trend was not evident on the 5th September but could be seen on the 7th September. The temperatures got down to -4oC, and despite starting at -1oC, the temperatures in the crop zone (0.7m to 2.5m), stayed around zero, and dropped rapidly once the Heat Ranger was turned off. 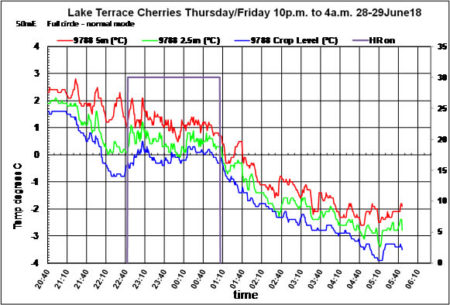 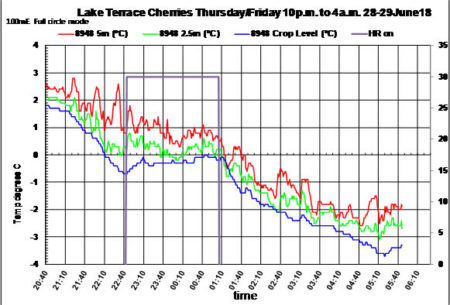 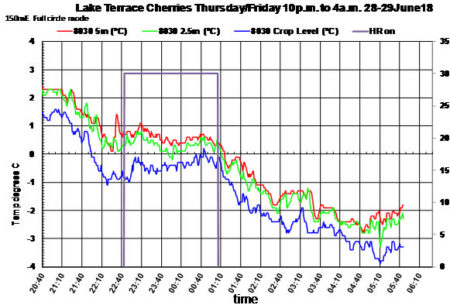 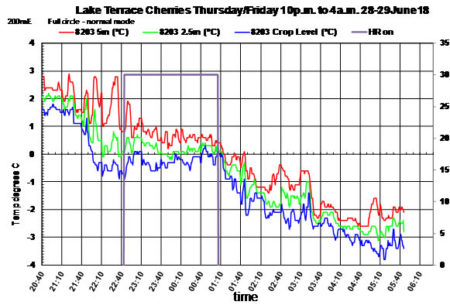 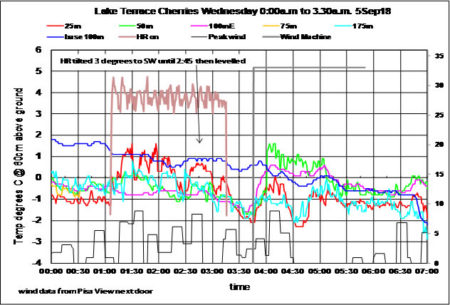 This test was run at slightly warmer temperatures than we had for the June test and the masts were set up on the colder west side of the orchard, apart from Mast 100E under the rolled hail covers. 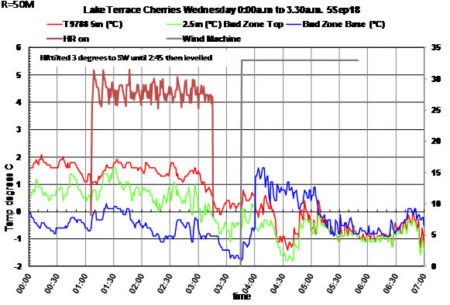 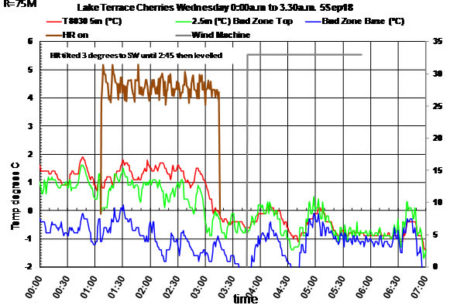 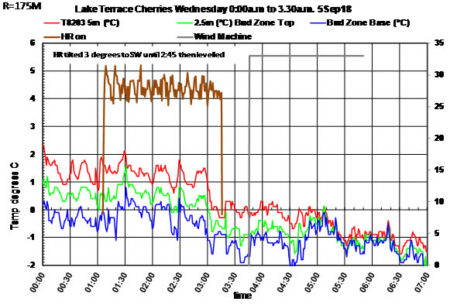 When looking at the R75m Mast compared with the R175m mast the 75m mast is about the coldest location within the orchard and the 175m had a better profile at the 60cm level than the 75m mast and it also had a closer spread between the three sensors, which indicates that distance from the machine does not necessarily have a linear relationship. 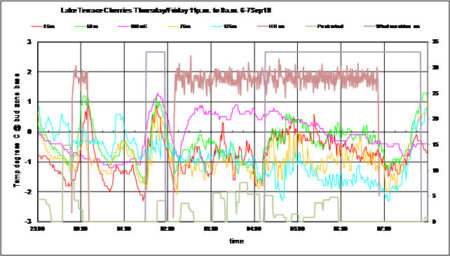 Again the masts are on the south west alignment except for mast 100E which is in the area with the hail cover rolls.

While we have the recorded temperature data we do not have any data on frost damage prevented to the cherries because the machine was taken out of the orchard prior to budburst to protect the nearby Parkburn vineyard, which was very successful in a -3o C frost in October. 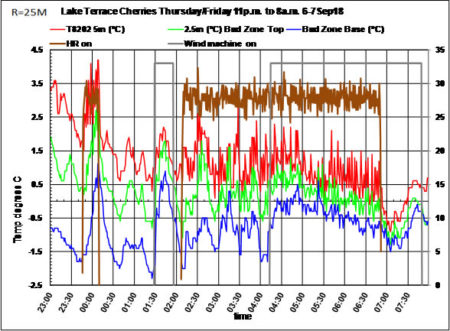 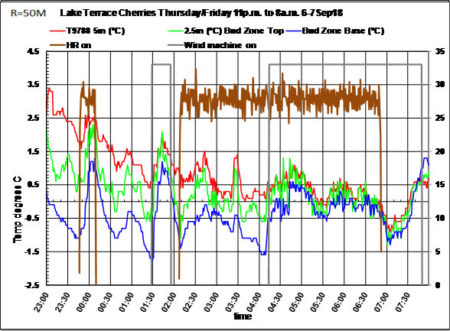 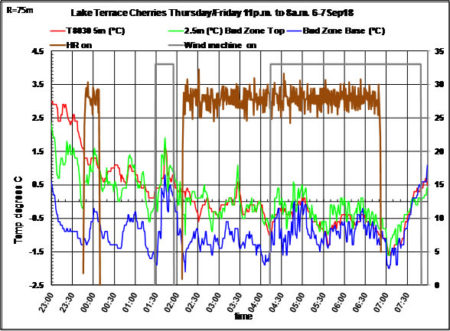 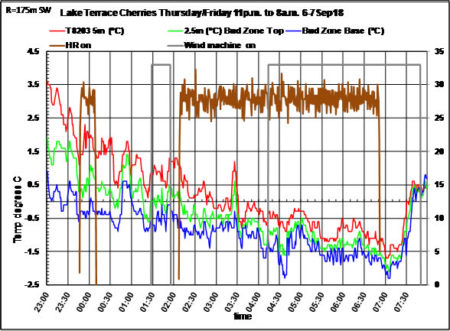